Are you ordering your sushi rolls the healthy way? Nutritionists weigh in! 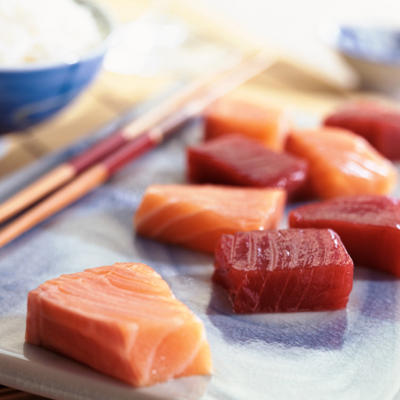 Carol Ann Rinzler, author of Nutrition for Dummies, points out that sushi is the very definition of a low-fat meal (as are fresh oysters and clams). But if you’re not eating it the right way, it’s not low-fat at all.

“To maximize the benefits [of sushi], choose pieces that are rich in omega-3s, the unsaturated fats that protect the heart and boost brain power,” Rinzler says. She suggests salmon and tuna, two of the healthiest sushi rolls to order, which are both low-calorie (40 calories per ounce for the salmon and 42 for the tuna), high in protein and omega-3s, and also deliver a big dose of vitamin D, a key nutrient in fat loss. 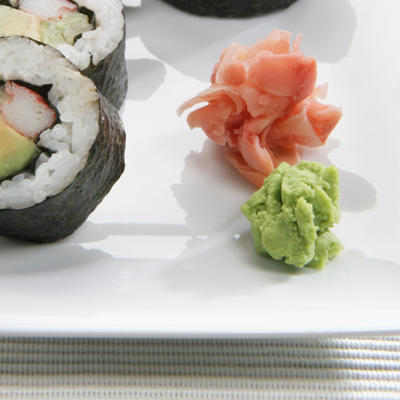 “Wasabi radish is packed with antioxidants like isothiocyanates, the sharp, smelly-when-heated compounds that give cruciferous veggies like broccoli their anti-cancer punch,” Rinzler says. And you don’t need much to reap the benefits. “A little wasabi goes a long way.”

Say No to Crunch 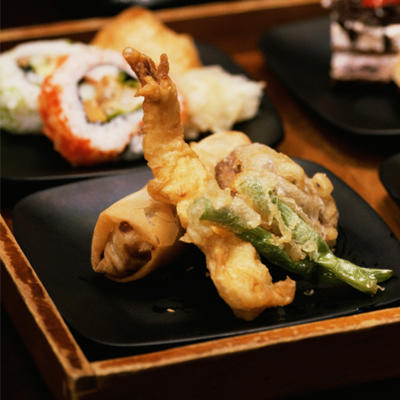 Margaux J. Rathbun, certified nutritional therapy practitioner and creator of nutrition website Authentic Self Wellness, says to stay away from the “crunchy rolls” that have been deep-fried to get that golden crust. “The less fancy the roll, the better,” Rathbun adds. 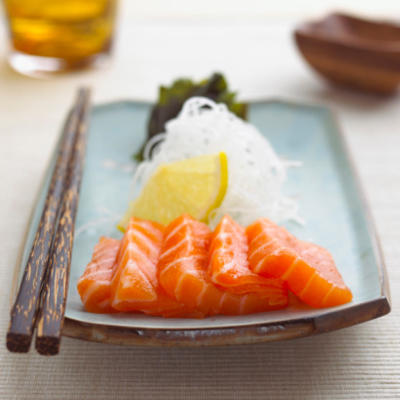 “Focus on ordering items that have been steamed or grilled,” Rathbun says. “One of my favorite sushi choices would have to be sashimi because it’s literally just the meat of the fish without any rice or extra ingredients.” 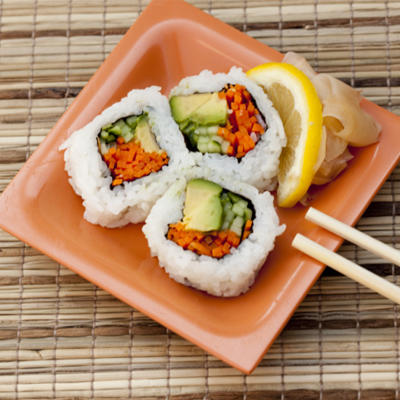 Incorporating “veggie rolls” into your Japanese meal is also a great option. “Many sushi restaurants include vegetarian choices on the menu with ingredients like fresh cucumbers, avocados, and sea vegetables,” Rathbun says. “Sea vegetables are also a powerful healing food full of nutrients like vitamin K, magnesium, and folate.” 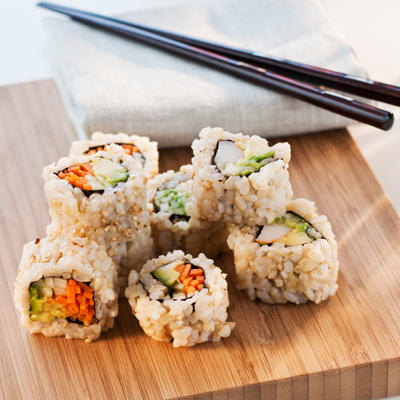 Ask for brown rice sushi instead of regular white rice, Rathbun says. “There are ample amounts of fiber in brown rice, which is important for maintaining healthy digestion and regular bowel movements. Brown rice is also a great source of manganese, selenium, and magnesium,” she adds.

Go for the Ginger 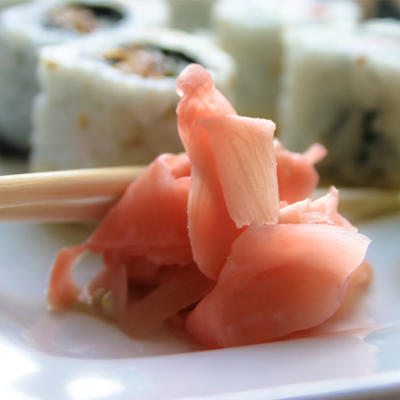 You know that little pile of ginger that’s always on your plate—it’s not just a garnish! Eat it! “Ginger helps to boost the immune system as an effective antimicrobial and antiviral agent,” Rathbun says. “It is also a good source of potassium, magnesium, copper, and manganese.” 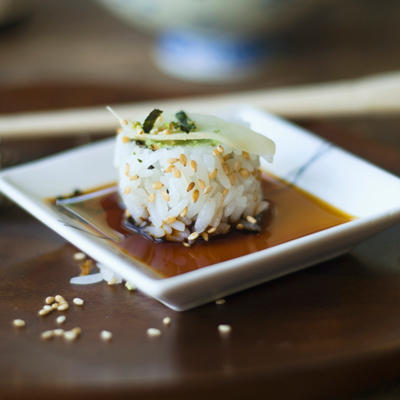 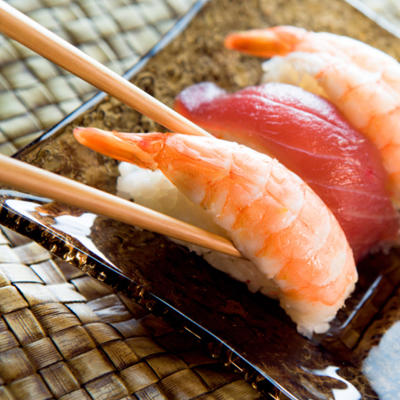 Using chopsticks—if you’re not super-skilled, that is—may help you eat more slowly than shoveling food in with the very-easy-to-use fork or spoon, Clark says.

Pacing yourself by eating mindfully is the best way to actually feel full, stimulate healthy digestion, and enjoy your food the most. 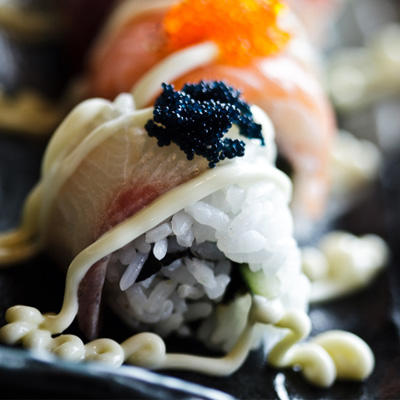 You know those delicious special rolls covered in creamy sauce? Don’t get those. “Ask for items that have no mayonnaise or cream cheese fillings, which isn’t traditional sushi anyway,” Clark says. 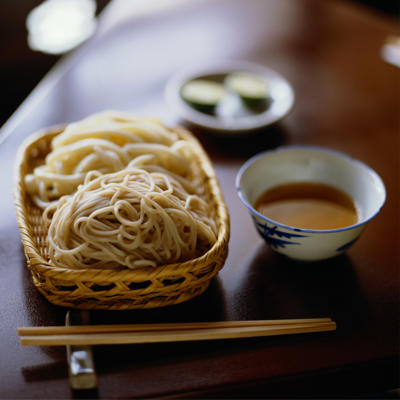 “Try dishes with soba noodles, made from the whole grain buckwheat,” Clark says. “Soba is a higher-fiber, higher-protein alternative to traditional white rice.” 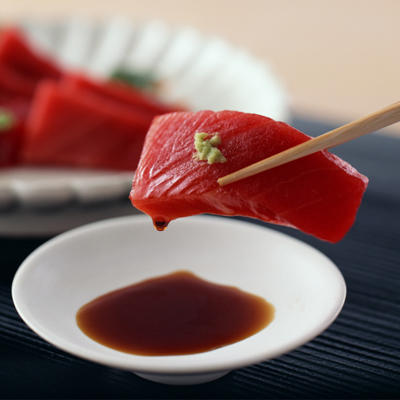 Janel Ovrut Funk, a Boston-based registered dietitian and blogger of EatWellWithJanel.com, reminds that each sushi roll has about one cup of white rice in it, which can add up to a lot of extra calories (one cup has about 200 calories) if you’re eating multiple rolls. Go for sashimi (pieces of raw fish without rice) over maki sushi, which has the fish rolled into rice and seaweed. 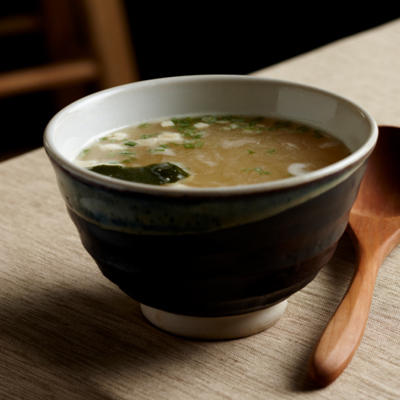 Start with a miso soup before sushi. It can actually help fill you up on the hot broth without a significant number of calories. A cup of miso soup has less than 75 calories, according to Ovrut Funk. 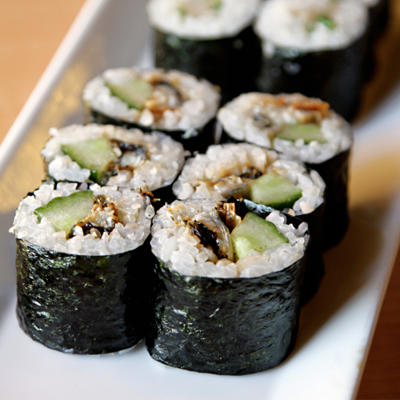 As you should with every meal, stick with the proper serving size, which is one roll or six pieces, says Ovrut Funk. “If you’re hungry for more, fill up on a salad and miso soup.”

How and Why to Make Your Own Camera Rig

8 Tips You Should Know Before Buying Your Next Digital Camera

How to Fix Camera Shake in Photoshop Using a Simple Filter

Why Mirrorless Cameras Are Great for Street, Candid, and Shy Photographers